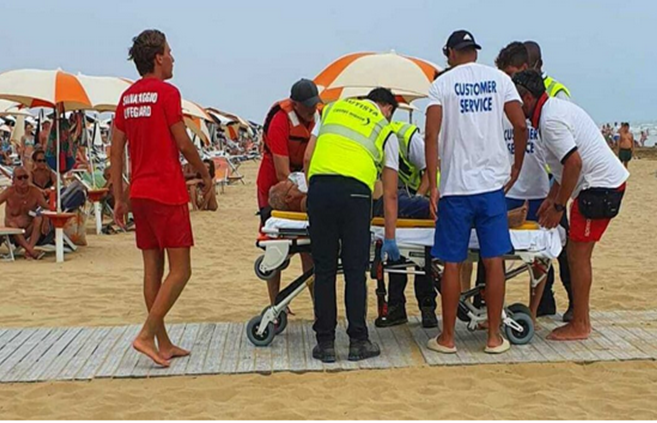 While Italians prepare for their fourth Covid “vaccine” injec­tions, the count of sudden deaths conti­nues to rise inex­orably – 11 under 60 years old in just the last hours.

Now that beach season is upon us, a new heart­brea­king pheno­menon is taking place, healthy vaca­tio­ners drop­ping dead from sudden and unex­pected “medical emer­gen­cies.” World­wide, beach­goers are collapsing while walking on the beach or swim­ming. Many of them suffer cardiac arrest and die. Blogger Tom Stahl reports, “At the begin­ning of July, in just 24 hours,  at least 11 vaca­tio­ners dropped dead on Italian beaches.” How many more cases occurred that have not been reported in the news?

As of July 2022, almost 48.7 million people in Italy have received two doses of the contro­ver­sial Covid “vaccines,” roughly 90.1 percent of the total popu­la­tion over 12 years of age. Addi­tio­nally, three out of four Italians have also received the booster shot.

While Stahl makes it clear that he does not want to auto­ma­ti­cally attri­bute the sudden and unex­pected deaths to the expe­ri­mental gene injec­tions, the amounts of inci­dents seem worrying.

The coast of Fondi, Italy:

On July 4, 2022, on the beach of Grado, an 85-year-old woman died. The woman felt ill while she was walking on the beach. The life­guards and emer­gency services inter­vened imme­dia­tely, but despite their attempts to revive the woman, there was nothing they could do. The couple had been on vaca­tion in Grado since last weekend.

On July 4, 2022, an 85-year-old retired Marine died on a beach island of Palmaria from a sudden medical emer­gency while swim­ming in shallow water.

On July 4, 2022, an 82-year-old Apulian tourist dropped dead on the beach. It happened in Alba Adria­tica on the Marconi seafront, near the Hotel Lido: the man felt suddenly ill. Despite being imme­dia­tely rescued, he died during trans­port to the Giulia­nova hospital.

On July 1, 2022, an 84-year-old Tuscan tourist on vaca­tion on the Marche coast with his wife died while taking a short swim. Life­guards disco­vered the man’s lifeless body.

On July 1, 2022, a fifty-year-old Ecua­do­rian on the beach with his wife and two children fell ill in the water and died.

On July 4, 2022, a 68-year-old man collapsed on the Seria river, and rescue workers could not revive him.

On July 4, 2022, a 72-year-old from Ortuc­chio, on vaca­tion with his family in Silvi Marina, felt ill while swim­ming. The man flagged the life­guards down, who brought him back to sure. Sadly the man died while being trans­ported to the hospital.

On July 2, 2022, a healthy 67-year-old woman dropped dead on the shores of Campania. Two other people were saved after suffe­ring sudden medical emer­gen­cies. The same day on Patrizia beach, rescuers were able to save 20-year-old suffe­ring from respi­ra­tory arrest.

On July 3, a man suffered healthy man suffered a medical emer­gency in the water. He was saved by a nurse who performed a cardiac massage with a defi­bril­lator. He was trans­ported to the hospital, where he was treated.

On July 3, 2022, A 36-year-old man from Senegal suffered a sudden medical emer­gency while bathing on a beach along the Adda River. The man was trans­ported to the hospital but unfort­u­na­tely died.

On July 4, 2022, a 79-year-old vaca­tioner died while swim­ming after a sudden medical emer­gency. Resus­ci­ta­tion opera­tions continued for a long time, but sadly, the woman could not be saved.

An 87-year-old tourist had an unex­pected medical emer­gency while at sea in Seni­g­allia and died. It happened in the morning at the seafront in Marzocca di Seni­g­allia (Ancona). The man was in the water about ten meters from the shore when he collapsed.

Mean­while, the list of “unex­plained deaths” and “sudden deaths” conti­nues inex­orably. This pheno­menon is so common it even has its own acronym: SADS, for Sudden Adult Death Syndrome.

While Italians prepare for their fourth Covid “vaccine” injec­tions, the count of sudden deaths conti­nues to rise inex­orably – 11 under 60 years old in the last hours. The youn­gest victim was 22 years old; another was a 52-year-old doctor. All the deaths were “sudden and unexpected”:

Elected Italian offi­cials, police, and medical workers should be deman­ding inves­ti­ga­tions into these deaths. Are the number of people dying not “signi­fi­cant” enough for them. Autho­ri­ties’ inac­tion is a slap in the face to the victims’ families.

This article was first published on rairfoundation.com

Please support our struggle for freedom and civil rights.
For every dona­tion (PayPal or bank transfer) of € 10 or more, you will receive on request a dozen „CORONA-DIKTATUR? NEIN DANKE“ postage paid and free of charge! Details hier.